In the Gardens at Stourhead House

These photos were taken on Tuesday in the gardens at Stourhead House in Wiltshire. My post about the tour around the house can be seen here. 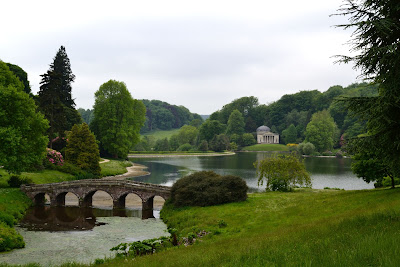 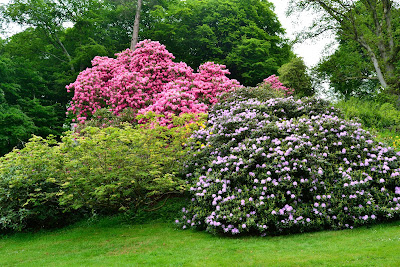 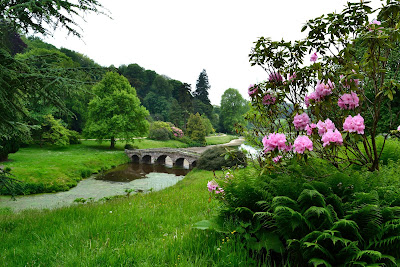 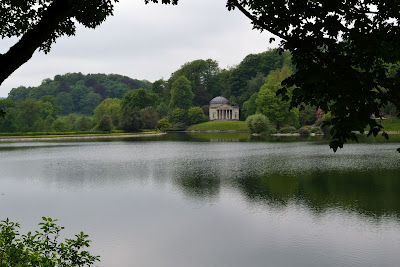 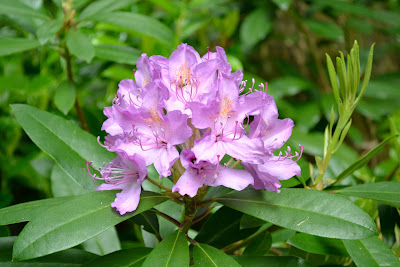 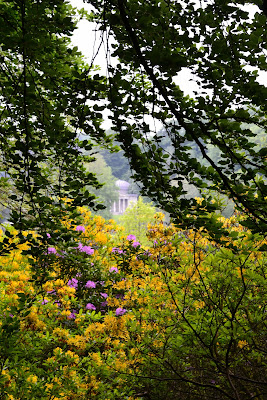 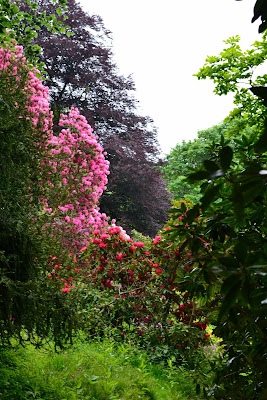 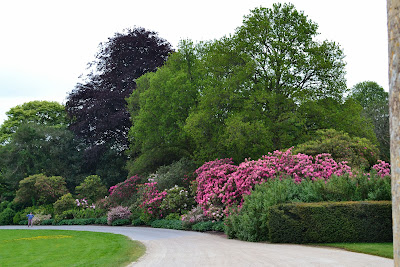 I couldn't take all the photos I'd planned as they were doing some maintenance work on the dam so part of the path round the lake, the grotto and one of the temples were closed to the public. I'll just have to go again!!

Linking with This or That Thursday.
Posted by Eileen at 5:56 pm 4 comments:

Labels: Photos, This or That Thursday, Wiltshire

This was definitely a challenging list but I've managed to do a photo for each entry (although one is from my archive as I'd left it off the list for some reason).

Many thanks to Kathy over at Postcards from the PP for organising the scavenger hunt.

13/52: Go Behind the Scenes in Stourhead House

Another one of my 52 things was to go behind the scenes in one of the stately homes.  Today I went to Stourhead House in Wiltshire, where they were running one of their rare tours to explore the cellar and attics.  It cost an additional £3 to do the tour but it was well worth the money.  There were loads of tour guides positioned along the route and you were allowed to wander through at your own pace.  You were also allowed to take photos (although no flash allowed, so the photos aren't brilliant).

There were also 3 volunteers in costume who described their life and jobs to us. This aspect of the tour was excellent and really brought the history to life. If you liked Downton Abbey, this was the tour for you! 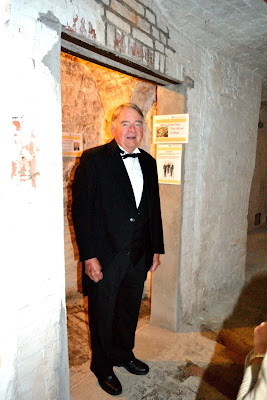 We started in the cellar where we met Pitt, the butler.  He told us it was 1895 and described his life to us.  He earns £125 per annum, quite a high salary as he performs the duties of both butler and gentleman's gentleman to Sir Henry.  He has worked for the family since he was 16 years old and he rose to the position of butler in about 10 years.
His day starts at 6:00am and his first duty of the day is ensuring that the fires in the kitchen ranges are lit (he supervises this task!) and then he works solidly through the day until the early hours of the morning, 1 or 2 am but sometimes later if there are house guests.  He has his own apartment near the clocktower/gatehouse but if he is working late he is able to rest in the butler's pantry.  He has about 12 indoor staff to help him run the household.  He isn't married ... he doesn't have time for 'such trivialities'! 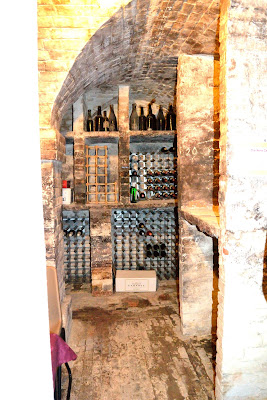 This is the wine cellar and Pitt is responsible for keeping it stocked.  He learned about wines from his dad, who was also a butler. The introduction of the railway has made this job easier as he can now get supplies from London.  The family only ever drink Dom Perignon chamgagne!

He offered a small glass of sherry to all the visitors. 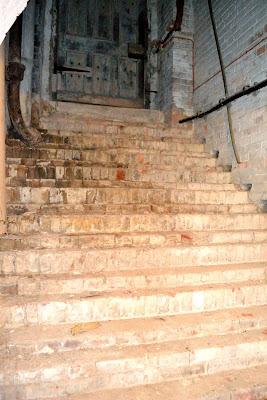 This is the barrel run where they deliver the casks of beer.  It's not easy to see in this picture but they are half-steps so that the barrels can be rolled down easily.  The beer is mainly drunk by the servants. 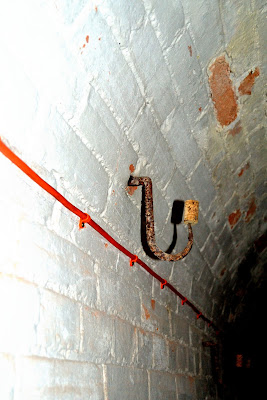 Meat hooks (with corks on the points, for safety!) where the meat and game was hung.

There were holes and gutter channels in the floor, put to use when they sluiced the floors after butchering the meat.


The cellars are actually very small and match the footprint of the original much smaller house, not the current building.  From the cellar we went up one level to the basement.  Here we saw where the laundry was done including the drying and folding rooms, the scullery where all the wet kitchen work was done and then into the kitchen itself.  This was where the dry food preparation and actual cooking was done. 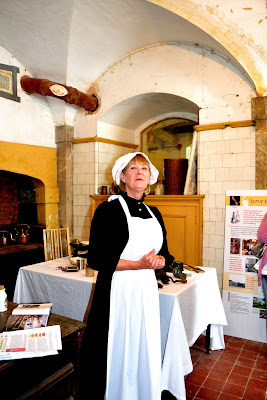 In the kitchen we met Mrs Humphreys, the cook.  She earns  £45 per annum (quite a lot less than the butler!), which she thinks is a good wage as all food and accommodation is provided.  She is also provided with two uniforms, as are all the other servants.

Her day starts at 7:00am and she has to get breakfast ready for the family by 8:00am.  Her day usually finishes at 9:00pm although this may be later if there are house guests.

As the cook, she cooks the food for the family and their guests.  The servants eat their meals after the family has been fed (but they are always on call so often have disturbed meals!) and the servant's meals are cooked by the kitchen maids (supervised by the cook) as part of their training for promotion to cook in another household.

Mrs Humpheys hasn't worked for the family for long.  The Lady of the family is a notoriously bad employer and once sacked three cooks within the same year.  There is a rumour that she has a permanent advertisment in The Times as she gets through so many staff! 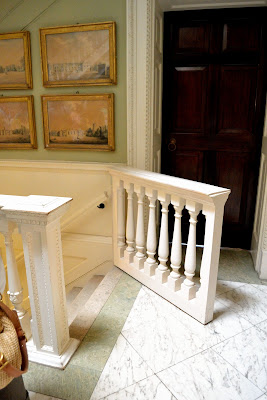 From the basement we went upstairs to the Inner Hall, following the route that the higher class servants would have followed. This took you into a part of the house where there was a possibility of seeing, or being seen, by the family or their guests.

The food arrived in this hall via a dumb waiter which is no longer in situ.

From here, we went up to the next floor, via the main staircase.  On the next floor are the family and guest bedrooms, now used for storage, offices and restoration.  Then on up to the top floor to see the nurseries and staff bedrooms.  The male staff sleep in the basement and are not allowed up to the top floor, with one exception.  The head valet sleeps up here, behind a locked door!  All the female staff sleep up here, room size according to seniority! 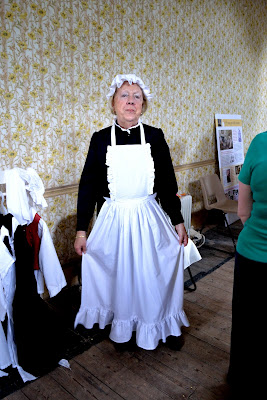 In the day nursery we met Maud Trott, the Head House Maid. There is also a night nursery which we didn't see. Seeing the day nursery was a real eye-opener - I hadn't fully realised how the children were treated and how isolated they were from their parents.  As with all the other rooms on this level, there was no view out of the high windows and we were told that at one time the nursery was decorated with grey flock wallpaper.  It must have been so depressing. 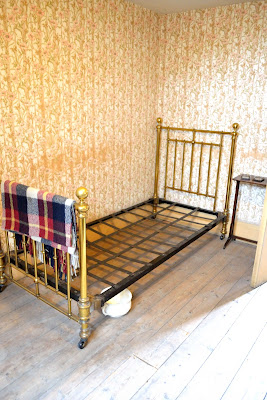 We also saw the female servant's bedrooms.  As to be expected the rooms were very small with basic furnishings.  The younger girls shared, two to a room.  The tweenie maid is only 12 years old but she isn't the youngest servant as the boot boy is only 10.

The tour ended with us descending to ground level via the back stairs. 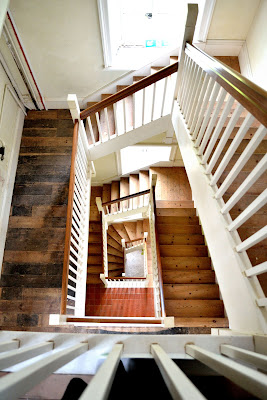 This was much more interesting that the subsequent tour around the main house.  We were give a real insight into how the servants lived and how the house was run.  I'll definitely be looking out for similar events in other stately homes. ﻿

Outside my window... it is a beautiful summer day.  The sun is shining, a brilliant  blue sky and no wind.

I am thinking... about nothing is particular.  I'm feeling fairly relaxed and, for once, don't have anything occupying my thoughts, just taking life as it comes!

I am thankful... that Ced is still with me.

In the kitchen... it is looking like the fall-out zone after an explosion!  I'll tidy up later and then cook our meal - roast lamb and all the trimmings.

I am wearing... red, white and black skirt and red top.

I am creating... lots of photographs (still to be printed) for my 2012 Project Life folder.

I am going... to have a quiet day, reading a new book and just moving from the sofa to get us drinks and food.

I am wondering... what to buy for birthday gifts - I have to buy four of them, all for under 2s.

I am reading... 'A Grave in the Cotswolds' by Rebecca Tope. I just started it this morning and will have finished it by teatime. I'm a very fast reader!

I am hoping... that the good weather continues as I have a three week break from teaching.

I am looking forward to... just chilling! I need to recharge the batteries.

I am hearing... a dog barking, the cricket commentary on the TV and the clicking of the computers keys - my typing and Ced is checking his emails.

Around the house... don't ask!  I need to get the housework sorted.

I am pondering... the rest of the photos I need to take to complete this month's Scavenger Hunt.

One of my favourite things... homemade lemonade.

Here is a thought I am sharing ...

If you'd like to see other daybooks, or take part yourself, please visit this site.
Posted by Eileen at 11:09 am 5 comments:

I've always intended to visit Iford Manor to see the Peto Gardens, but as with lots of things right on your doorstep, had never got round to it ..... until today. I went with my friend Suzy to take part in a Songways Singing Day at Iford Manor and it was actually held in the Peto Gardens.

The singing day was run by Jane Harris and in her introduction she described the day as being 'A feast for the senses - we have the garden to ourselves and will sing for our own enjoyment, exploring the different acoustics and beauty of each part of the garden including the intimate Italianate Cloister with its exceptional acoustics and atmosphere. Uplifting harmonies, joyous singing and moments of glorious tranquility all in a magical setting'.

And it has been a truly magical day.  Perfect weather, beautiful surroundings, like minded people (55 of us) and amazing music.

Here's my photographic record of the day.

From here we moved to the cloister.  We were asked to walk in silence and on the way, open ourselves up to sights and sounds around us.  Not captured on camera were the sound of birdsong, the weir by the bridge, bees buzzing around and ...


This was a very special way to experience all that Iford Manor has to offer and the Songways Singing Day will definitely be repeated in the future.

A beautiful sunny day, not a cloud in the sky, lovely and hot, just the right weather to celebrate the Olympic Torch Relay.

Despite the weather, I really thought it was going to be a damp squib ... compared to other local towns, Trowbridge hadn't made any attempt to celebrate the event.  Calne and Bradford-on-Avon had put partiotic bunting up along the route but Trowbridge hadn't bothered at all.  However, I was wrong and I had a great time.  Apologies again for the quality of the photographs but here's a photographic record of my once in a lifetime opportunity to see the Olympic Torch.