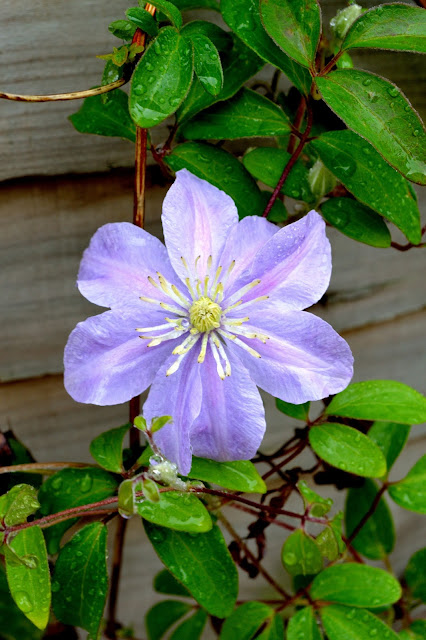 Me on Monday ... is having an up and down sort of day.  Getting the downs out of the way first - I got soaked getting from the car to my first school and again when leaving, so I've had to come home to change my clothes.  I'm also struggling with technology today; the iPod jammed during my first lesson so I've had to manage without backing tracks, and now I've tried to reset it at home but the computer doesn't seem to be able to recognise that an iPod is attached.  It's a problem for tonight I think!
There have been some ups to compensate though.  I went out in the garden, between rain showers, to take the photos for 5 in 5 and found that one of the clematis has a couple of flowers. This one didn't perform very well at all this year back in the spring when it was supposed to flower so this is a bonus, though I hope it doesn't affect next year's show. I've arrived home to some lovely mail from friends who live abroad; I've had a quick look but I'm saving them to read when I get home later this afternoon.
I had a quiet weekend.  Apart from band practice, when we had another two new starters, I didn't do anything much. We'd stayed behind after the children left to sort out some of the music but I kept feeling faint so had to go on home and decided that I needed to take it easy.  I was supposed to do a photo walk yesterday but that was cancelled at the last minute which I was quite relieved about as I wanted some time to myself.  I've been reading mostly, but also writing a couple of letters to penfriends and planning a series of photo projects for myself.  I also had a think about possible prompts for the Winter Photography Scavenger Hunt (before I liaise with Joy), but haven't got very far with that yet.
Linking with Sian at From High in the Sky.
Labels: Garden Me on Monday