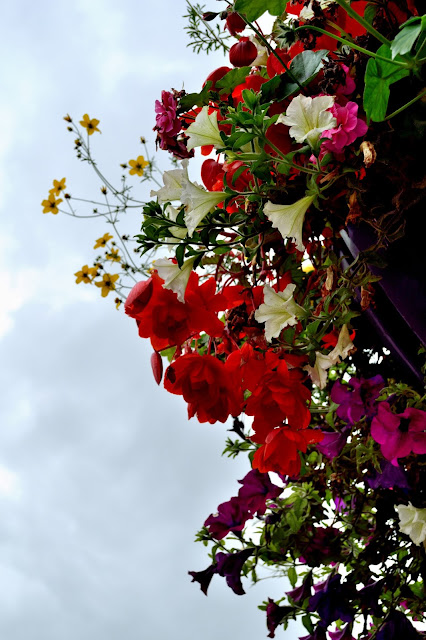 Me on Monday ... at home, playing catch up after a week without the laptop working properly.  It still isn't right but at least is usable for the time being - I don't know if it can be sorted or whether it is time for a replacement.
It's pouring down so I'm quite content to be at home.  I'm back to my 1, 2, 3 lists and the approach is working well; things are getting done and the load is starting to feel lighter.  Today is set aside for sewing name labels on new school uniforms for Little Miss C who's going into Year 2, and Little Miss H who is starting in Reception. I've nearly finished that task and then I'll be finishing up the scanning of the family photos so that the originals can be returned to my sister. It's not all work though - I'm taking regular breaks to read my latest book,  I am Pilgrim by Terry Hayes, which is proving to be as good as I was told and I'm thoroughly enjoying it.
On Saturday I went on a day trip to Greenwich.  The high spots were a ride on the Emirates cable car over the Thames and a visit to the Cutty Sark, both memorable events and, more importantly, gave me more photos for the Summertime Scavenger Hunt (which I'll post later in the week).  I did plan to visit the Observatory but suffered from a bad attack of the dizzies on the way - due to the heat - so abandoned that idea.  I made my way back closer to the coach pick up point and sat for a while with plenty of drinks and amused myself by people watching, and then pottered around the shady part of Greenwich Park looking for photo opportunities.  It was a lovely day out but I would have preferred it to be a little cooler!
On Sunday I had a lazy start to the day not doing anything much and then spent the afternoon with friends completing a photo treasure hunt around Melksham.  The photo at the start of this post was taken as part of the hunt, for 'looking up'.  Back at home I settled down for an evening watching Les Miserables on the TV.  Another enjoyable day.
According to the forecast, it will be raining all week so I doubt I'll be going out much.  I'm off to London again on Saturday, but I'll tell you about that next time.
Linking with Sian at From High in the Sky.
Labels: Family Me on Monday