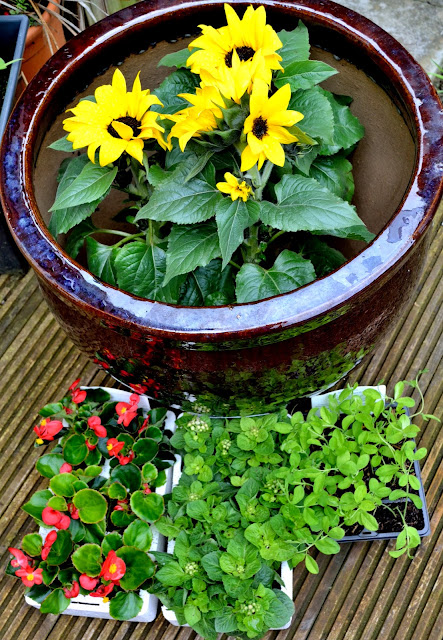 Here are the spoils from yesterday's excursion to the garden centre.  I'd planned to buy a big pot to use up my voucher, but admit that the plants were impulse buys.
I needed a pot that was big enough to fit the obelisk I have.  The ones I bought earlier in the week are slightly too small, so this time I was organised with a tape measure.  I spotted the pots from the conservatory where we had lunch and was more than a little excited to see that they had a 50% off sale, which means that the one I bought was selling for £29.99 instead of £59.99. I doubt very much that I would ever pay £60 for a pot and this is bigger than I needed, so may look a bit bare in terms of planting this year, but this bargain price was too good to miss.
As for the plants I bought some more sweet peas, a tray of Ageratum Blue, a tray of Begonias, and three dwarf sunflowers.  I don't have enough ceramic or terracotta pots for all the plants I have this year so, for now, quite a lot will just have to go in the plastic pots I already have.  I bought some more compost and the grow bags in Lidl - much cheaper than the garden centre!
I've just glanced outside - it's raining!  Hopefully it's just a shower and I'll be able to get outside soon.
Posted by Eileen T at 11:00 am