In the end yesterday's power cut only lasted about 40 minutes and it tried it's hardest to snow later on but it was much too wet to settle. Instead we now have flood warnings to worry about and as the other end of the village floods every year I'm sort of expecting it to become a reality. Luckily my home won't be affected if it does flood.

I'd planned to go to Bath this morning to buy my walking boots but in the end, couldn't face going out. Maybe tomorrow. In the end I've settled for catching up with bits and pieces that are on my mind so that everything is cleared before Christmas ... or much sooner hopefully.

To start with I've dealt with some overdue email replies, written and posted some of my Christmas cards, and sorted out a pile of books for the charity shop pile - either ones that I've read or which have been passed on to me but which I don't fancy reading. I'm now in the kitchen and have a pot of chilli and a pot of lentil and vegetable soup bubbling away. Once they're done, I'll make some bolognese sauce, and shepherdess pie and shepherd's pie. The pies will be finished off in the oven and I'll have some shepherdess pie for my meal tonight with the remainder of the cabbage and cauliflower, and the rest will be portioned and stacked away in the freezer.

While stuff is bubbling away on the hob I've set my laptop up on the table and am slowly working my way through bits and pieces of admin for the band. It's probably going to take me two or three days to get it all done and is the biggest 'thing' that's preying on my mind, so the sooner I get it all done, the better I'll feel. 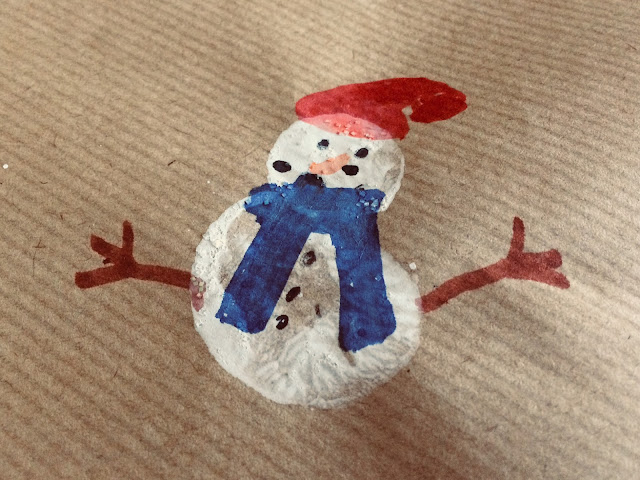 I bet nobody else has wrapping paper like this ... lovingly made by my Thursday class as their contribution to their school's Christmas Fete. Tomorrow I'm visiting my Tuesday school to watch the KS1 nativity, so something nice to look forward to.
Labels: All about ...