Me on Monday (continued) 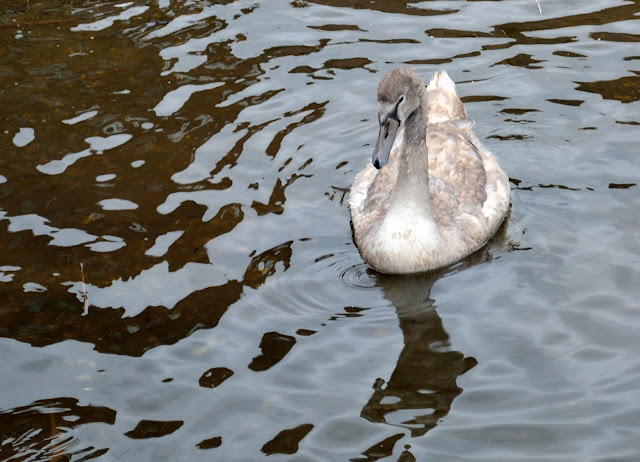 Bank Holiday Monday and I'd booked a place on a mystery tour.  As expected it was pouring with rain so I wasn't too hopeful for a coastal destination and thought it was possible we'd head to somewhere like Cardiff, where there is plenty of wet weather activities.  I was completely wrong ... we went south!
Our first stop was the lunch break in Boscombe, where we had two and a half hours before we had to be back on the coach.  I found a lovely little café for lunch and by the time I'd finished it had stopped raining.  It was still looking a bit grey so I decided against walking along the beach; if the sun had come out I'd have tried for some photos of the pier, but the sales signs in all the shop windows tempted me so I chose to do some clothes shopping. I was hoping to get some more tops suitable for work, but no luck on this occasion.
Back to the coach and everyone was there except for one person, an older lady.  We waited for half an hour and then the driver wandered around the town centre looking for her but couldn't find her.  They phoned back to their head office but she hadn't made contact with them or asked the local police for help, so they authorised the coach to continue without her.  It put the dampers on spirits for a while; it's not nice to think that she was stranded so far from home but on the other hand, there were all the other people on the coach to consider. I'm glad that I didn't have to make that decision.
Anyway, we'd lost so much time by now that I think they changed the next destination to somewhere closer and we ended up at Lymington, but because of the delay caused by the missing passenger we only had an hour to look around.  The rain held off so I opted to wander down to the quay to take some photos but I got sidetracked when I spotted some door knockers so ended up taking photos for the scavenger hunt.  Lymington most definitely is the place for ornate door knockers - I ended up with 6 different ones and now have quite a collection!
I did make it down to the quay to take a few photos but it was all a bit grey still, and then I got sidetracked again whilst I was photographing the swans and their cygnets, when I spotted a few more possibilities for the scavenger hunt - some people eating outside.
Then it was back to the coach for the return journey and I was home by about 7:30pm.  Despite the poor weather I had a good time and will look to doing some more mystery tours next year.﻿
Posted by Eileen T at 11:15 am

Labels: Birds, Me on Monday