When I had the hard landscaping done in 2017 my aim was to have a garden that was mostly patio with limited ground planting and with the majority of plants grown in containers. That still applies. It'll be predominantly a flower garden but there is scope for growing some fruit and vegetables if I decide I want to. I'd like to end up with all year round interest but especially a selection of plants which flower for prolonged periods during the warmer months. The plants already in the garden will be staying but may be moved to new positions.

Here's a (very) rough outline sketch of the garden so you can follow what I'm talking about. It's not to scale and doesn't show the changes of height where the path is. That actually says 'HOUSE' not 'HORSE' - I had to fold the paper because I'd drawn the patio way too wide 😂 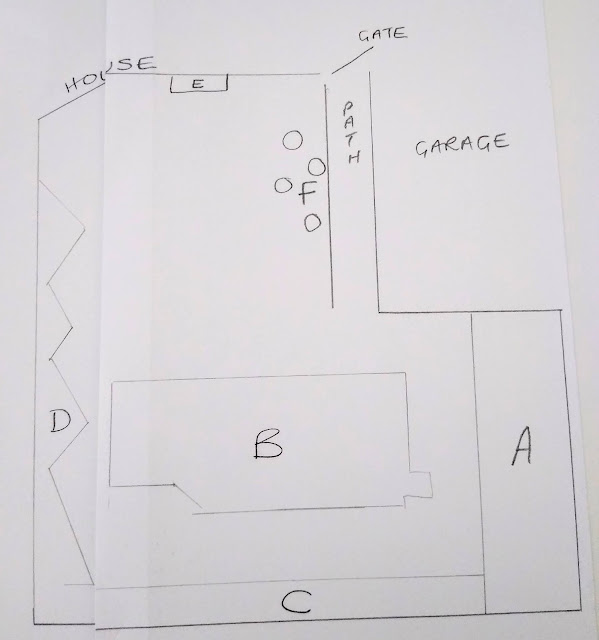 The parts marked as A, B, C and D are beds that will eventually be planted up. E is where the poorly burgundy clematis is, and F is where the pots are.

I'll start with E. I know I should have given more consideration to labelling each area but E is the easiest to discuss so it's going first! There is a trellis fixed to the back wall of the house and this is currently the home for the poorly pot grown clematis. The clematis will be moved to C once it's been pruned (whenever that is!) and pampered when it's replanted against the fence. In it's place against the back wall of the house I'm going to have a small container grown honeysuckle, probably this one - Rhubarb and custard, which has a height of 2 metres and spread of 1.5 metres.


F is where the plants currently in pots will continue to live. I haven't drawn this properly as it's more of a narrow triangular shape than it appears in the sketch and there are also a couple of pots by the top triangle on the left hand side. These could all do with being repotted. The euonymus definitely needs to be in a much bigger pot as does the pieris. There is also the hydrangea fire and ice, and the magnolia tree I was gifted. This part of the garden has some shade in the morning but seems to be the best place for these plants and they've all done well here. This is also the area where I have the table and chairs.

D next. Apart from being weeded and generally tidied up, this part of the garden won't get much attention this year. This is where the two climbing roses are and I have no plans to move them although they need to be pruned and tied in properly. There is also a third rose at the end of the fence nearest the house which was bought as another climber but which clearly isn't! It flowers, a beautiful white rose, but it's scared of heights or something and isn't even tall enough to reach the trellis after three years! Just below the actual letter D in the plan is where my neighbour's honeysuckle grows over the fence. I'm perfectly happy about this as I can enjoy the beauty of it without the constant battle to stop it from taking over, but equally I will ask them to cut it back if it ends up interfering with my plans.

My water supply is on a meter so I want to take this opportunity to improve the water butt situation in the garden. I currently have a very old 100 litre water butt which is on its last legs and the tap is temperamental so water quite often drains away, so I've been looking for alternatives that will improve the storage but won't take up too much room. I've found this ...

... which holds 320 litres with space to plant in the lid. The B & Q website doesn't specify the height but I will order one to replace the existing butt as it can't be seen from the house anyway. It'll be sited where the existing water butt is so will be fixed to the down pipe from the garage and set at the end of A against the garage wall.