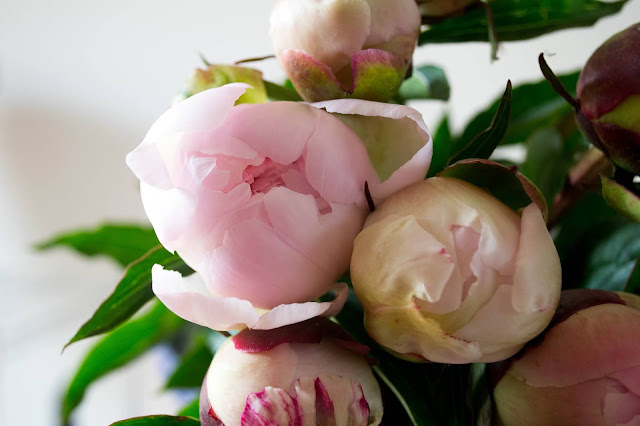 I'd love to have a garden full of peonies but I don't have room, so treating myself to the occasional bunch of pale pink peonies is the next best thing.

It's gardening day today. M will be here later and there's loads for her today, starting with planting up some more pots - dwarf sunflowers, busy lizzies, petunias and, in the centre bed, plant some more sweet peas as the first lot disappeared never to be seen again! The weeds are taking over in places, so lots more ground cover is needed sooner rather than later - I'll ask her for suggestions and then go and buy them while she is here so that whatever I get can go in the ground today. The two existing roses need to be moved off the trellis, which is broken, and trained along wires instead. The rambling rose is looking lovely but the white rose next to it is suffering from the attentions of the previous gardener who pruned out the centre of the plant and it now looks rather sparse. I'll see what M suggests to sort that out.

The vegetables are not doing as well as I'd hoped but look as good as any of the neighbours efforts - I asked D to check them for me and he couldn't see a problem, except for the obvious damage caused, we think, by a cat who has climbed up on the pots and crushed one pot of mangetout and a couple of the tomato plants.  Again, I'll see what M suggests.

This afternoon it's the nutrition class but I'm not worried if I miss it this week as it is a recap of carbs, fats and proteins. Once M is finished for the day I'll make a start on reorganising the freezer, and then make some more meals to be frozen in portions - cauliflower cheese, savoury lamb mince, vegetable curry, and a bottom of the fridge soup. That'll take up a good part of the afternoon so I'm not likely to get out for a photo walk today, but never say never as there is nothing I want to watch on TV today so there's at least a chance of a walk around the marina tonight.