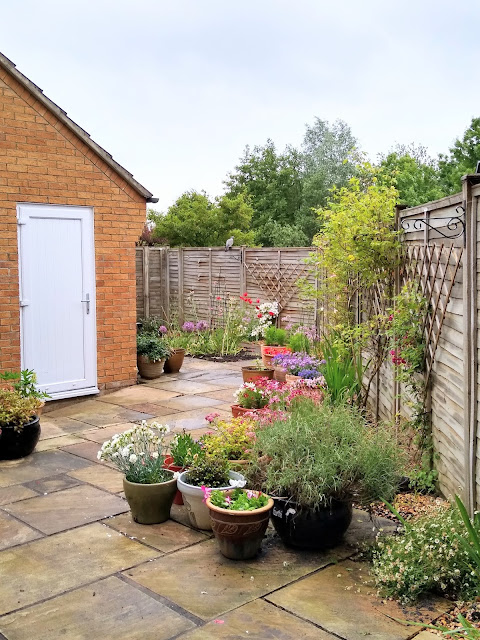 It poured down yesterday but M, despite being soaked, carried on and worked her way through my list. She is absolutely brilliant.

The impatiens, petunias, dwarf sunflowers, and sweet peas have been planted and that will probably be it for summer annuals for this year ... but I will be visiting the garden centre to buy other things so who knows what will happen!

We discussed the next stage of the planting to work out how to achieve some autumn and winter colour and interest. There are already plants in pots that address this - euonymus, leucothoe zedlib, gaultheria procumbens, and the autumn flowering camelia (once it's grown up!) - but have decided to add two climbers to fill in the gaps on the fencing. I've chosen a cotoneaster and a red jasmine as both will provide interest for the majority of the year and have berries in the winter for the birds.

As part of the discussion about autumn colour we also reviewed the centre bed and the changes that we both think are needed. I like the knautia but think they will look better in the far bed against the garage wall so will be moved once they have finished flowering. The honey garlic is going; they are not as colourful as I was expecting and I just don't like them enough for them to stay, so M is having them and in return will give me some more sedum from her garden. This leaves the alliums, gladioli and nandini in this bed and the gaps will be filled with the shorter versions of verbena, salvia, wallflower, foxglove and something else I've forgotten the name of. There will also be spring bulbs in pots ... coloured pots! 😀

At the moment this bed also has an obelisk for the sweet peas (if they ever get their act together and grow!) but for next year they will be pot grown instead.

We had a long chat about the existing white rose. It's not looking too healthy so M has suggested that, at the end of this season, she prunes it right back and moves it to the front of the house and I choose another one to replace it in the back garden. I queried the problems with planting a rose in the same spot where a rose has been grown before but, it got quite technical here, there are ways round it and it's worth a try so that's what we're going to do. I don't know that I want the white rose at the front of the house so will decide about that later on - my nephew may be interested as they have hardly any plants in their new garden.

I think that's about it for now. There is still the ground cover to address but M wants to get the structure plants in place before worrying about that.