M was here for five hours yesterday and we got loads done ... I say 'we' because I helped out and just generally got in the way!

The bulbs have been lifted from the terracotta pots and the new plants have taken their place. Two of the three lavenders growing in the front garden have now been moved to the back garden - they're old plants and getting quite woody but for this year those two are in pots in the back garden. The third is in the green bin!

There has been lots of weeding and general tidying up, but best of all, we managed to move the bulk bag of topsoil into the garage and drag the bulk bag of gravel round to the front where it's been dumped on the garden for now. The front still needs a bit of a tidy up but it looks fine for now.

I'm really pleased with how it's looking, bearing in mind that the plants still have a lot of growing, flowering and looking pretty to do. There are a couple of places where it's a case of the right plant in the wrong place so I think there will be a bit of a swap around when they've finished flowering. 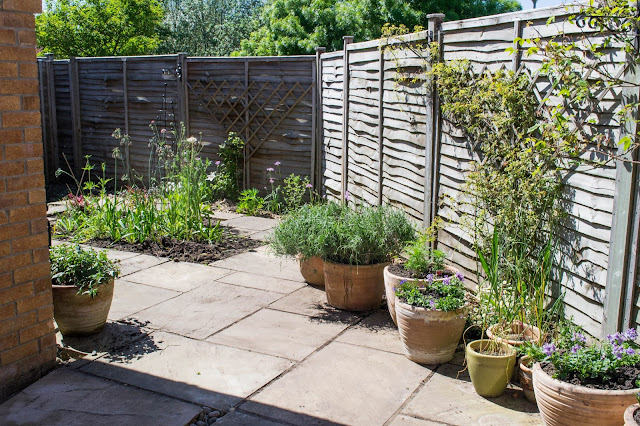 The photo above was taken from about half way down the garden, standing with my back to the house. There are still a lot of alliums to flower and then gladioli will show their heads next month. The cosmos, lavender, nemesia, lobelia and bacopa are in the pots on the right of the photo and will be brightening up that part of the garden soon. The pot on the left by the garage wall is filled with fuchsias - it arrived as a hanging basket but M replanted it for me - and is a belated Christmas present from friends.
The photo below shows the area behind the garage. The two new roses have been planted against the fence and will be trained on wires, the pink one is on the left and the red one on the right but they will meet in the middle and grow together. The shrubs in that bed, from left to right, are hydrangea fire and ice, pieris katsura, and an autumn flowering camellia which I've forgotten the name of! There's some ground cover in already - the sedums, and three different periwinkles - but it'll need some more eventually, and there are nerine bulbs planted and ready to flower in the autumn (but I'm not sure if they will flower in their first year). I still have to get the new huge water butt which will go next to the existing one. 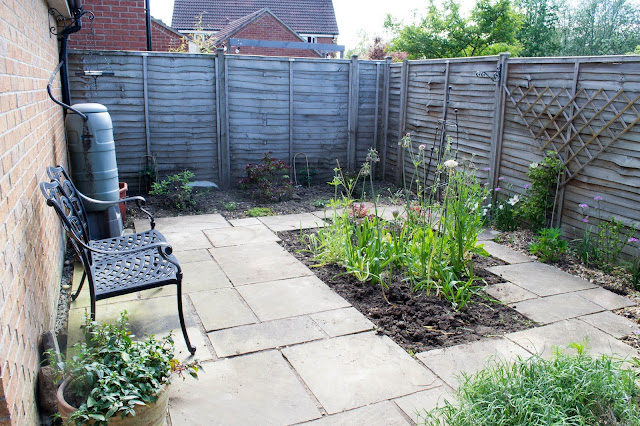 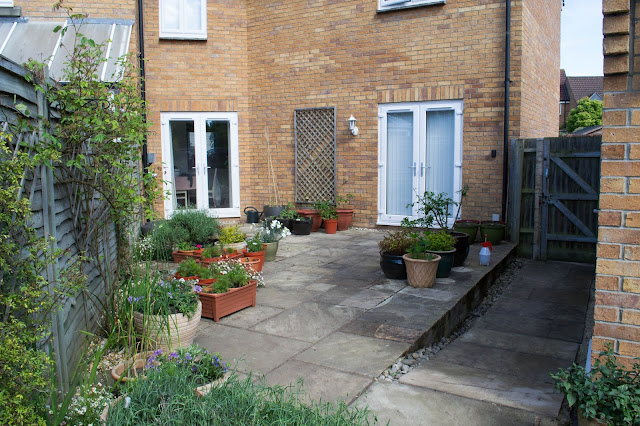 The photo above shows the annuals and pretty things on the left, the veggies against the back wall of the house and the foliage plants which prefer the shadier side of the patio are on the right. There's still a bit of moving round to do but we're getting there!
The photo below shows the view I have of the pots from the bench behind the garage, which is where I usually sit. The two wall mounted planters have been planted with red nasturtiums and just below them you can just see the apple and cherry patio trees, slightly hidden by the other lavender. 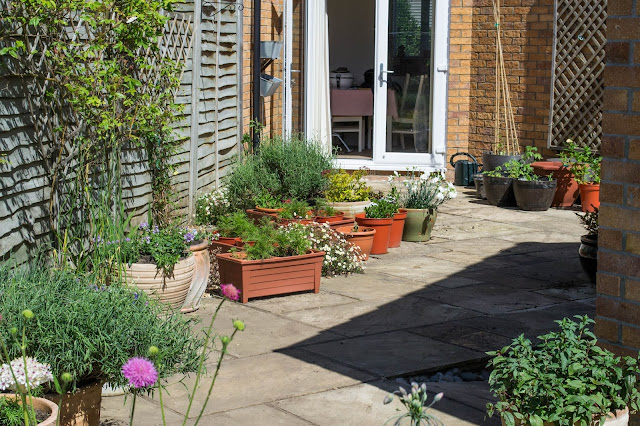 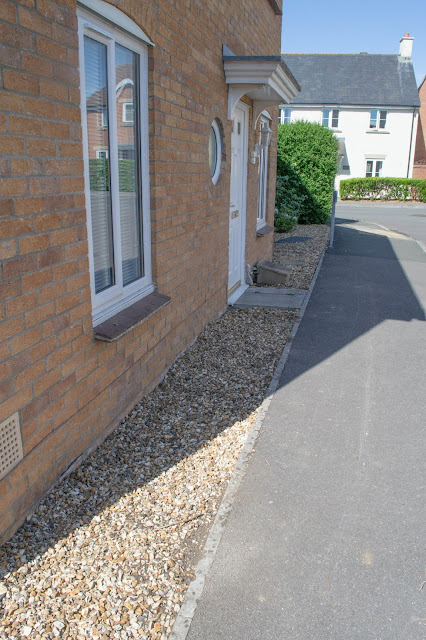 Moving on to the front garden, it's looking very empty now but I'm okay with that. All that's left is the buddleia wisteria lane, and a small rhododendron which, for some unknown reason, is only producing flowers on one side. We discussed the planting for this area and have decided on naturalizing bulbs, planting in drifts of colour. The buddleia will stay but the rhododendron may be donated to the Mencap garden once it's finished flowering. I will be ordering some crocus, muscari and nerines, concentrating on the part along the front of the house to start with. 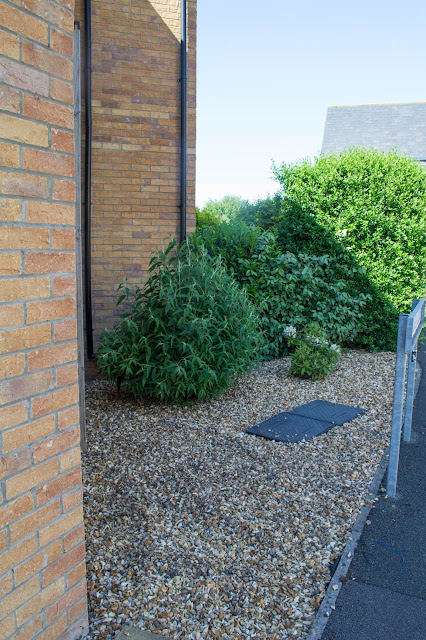 We discussed what else is needed for summer colour so another garden centre visit is imminent. I want to buy some more of the red pots while they are still available and while I'm there will also get some more annuals to go on top of the pots that are already planted up with spring bulbs, so probably some more lobelia if they have any.

So the plans are that in her next visit M will plant up any annuals I buy and continue with the weeding, and the following visit will make a start on the patio itself. It needs to be power washed to start with and then the grouting replaced in places. I have to order the new water butt and get that installed, and also ask my nephew for help with running a hose round from the tap on the front wall of the house.