The Garden at the End of June

These are the six plants I bought at the garden centre on Tuesday, even though I only really have space for two of them. I'm blaming Joy for this as she left me unsupervised and she knows what I'm like! There's a clematis Doctor Ruppel, which is for the fence panel nearest the house - that one is sort of planned although I'd previously agreed with M to leave it until next year. I saw some Angel Fishing Rods so bought two plants, which I'm counting as the two plants we agreed on and finally, three pink dahlias. I did ask a member of staff about these who assured me that they don't get much bigger and said that three in a pot would do well, so instead of the one plant I was going to get I came home with three. Now after a bit of a trawl through Google, I think he may be wrong and that one plant would have been enough. Oh well!

There are also some new plants that I ordered online and which will be arriving soon. These were all agreed with M so I know there is room for these! First, and in transit, is a mauve and white potato vine to cover the trellis at the end of the garden in the corner just beyond the tutti frutti hanging basket on the right of the photo below. 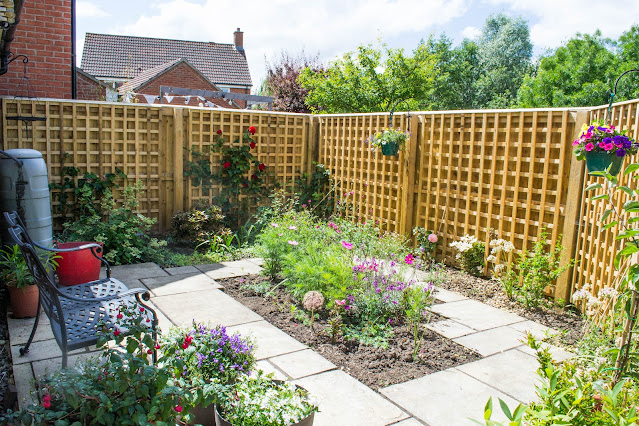 Also on order for this part of the garden is a phlox Pharao Red Eye which will be planted in the empty corner of the centre bed, and alstromeria Butterfly Hybrids which will go where the small white clematis is (next to the pink Eden rose against the fence) ... the clematis will be moved into one of the wooden planters. For now I think the alstomeria will be grown on in a pot. I'd also ordered a gypsophila and a laverera Barnsley Babe but have been notified that they can't meet my order so have refunded the money. I know you're thinking that this solves my problem of the extra plants but I particularly wanted these two so will order from another company.  A load of gladioli have been planted in the centre bed and in the corner bed near the hibiscus - a selection of pink, deep purple, and white flowers. The pink Eden rose has produced lots of flowers but is slow to gain any height, which is a bit disappointing for a climber, so M is on the case! Eventually, it should fill that fence panel and grow through the the potato vine to the right and the cream rose in the far corner will grow to meet it. 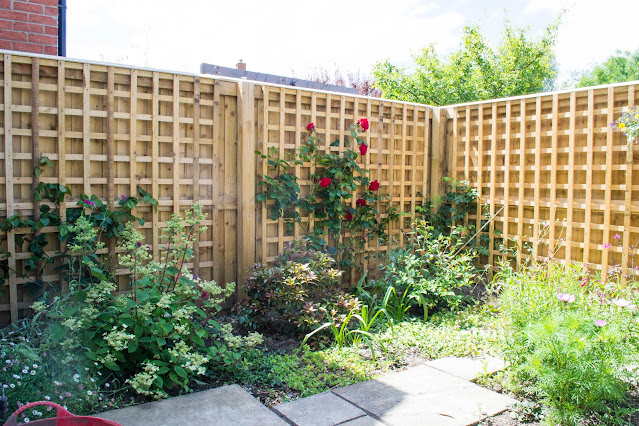 This is the shadier side of the garden and gets the late afternoon and evening sun. The red rose, Crimson Cascade, is doing well as is the cream one, Claire Austin, to its right in the corner. The cream rose has produced lots of flowers but none visible when I took this photo! The shrub in front of them is an autumn flowering pink camelia (I can't remember the name) but it hasn't produced any flowers yet ... hopefully it'll get its act together this year. To the left of that is a pieris Katsura  which has really flourished since being replanted in this bed, as has the hygrangea Fire and Ice on the left side of the bed. The hydrangea flowers start as a pale cream, fade to white, then turn pink and finally to red; it's been sulking because it was moved a couple of times but it seems to be happy where it is now and has had a bit of a growth spurt. There's a pink rose, Kiss Me Kate, behind the hydrangea but it's not doing too well so we've decided to see how it gets on this year and, if it doesn't improve, will look to replace it next year. 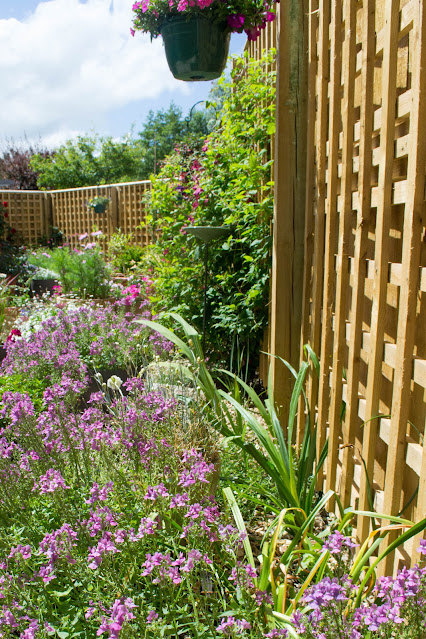 Back up to the part of the garden near the house, this is the panel that the new clematis will cover. The pink nemesia are all in pots and and I may move them around to mix them in with the other pots. We're gradually working towards sorting out the planting in the flower beds down this side so that there are climbers doing their job of covering the trellis, the plants in the ground will provide the next layer of height, around 3 - 4 feet tall, with the pots giving the lowest level.

The bird bath has been moved to this bed as the existing clematis provides some cover and M has let the clematis bulk out more than we usually do to help with this. It's working as, even though I haven't bought any new feeders yet, there are definitely more birds coming into the garden and using the bath. There was one of the tit family there yesterday and I've also seen sparrows, a blackbird and a wren. There's still no sign of cats, thankfully. The rose you can see to the right of the fuchsia hanging basket is one of the ones that was cut right back when the fencing was replaced. It has regrown well but it's only leaves and there's no signs of any buds, which is very late for this one. We'll see how it gets on and make a decision about it at the same time as we decide on the pink one I mentioned earlier. This particular rose is white with a tiny hint of pink and it's very pretty so I hope it sorts itself out. The other rose that was cut right back, the one with the identity crisis about which colour it should be, is slowly growing back and has produced its first flowers so that'll stay. It's beyond the crocosmia so you can't see it in this photo. 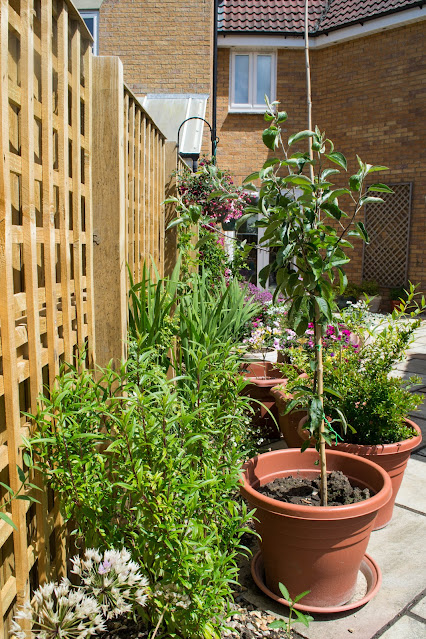 The four plastic terracotta pots in the photo above contain a patio cherry tree which may go in the centre bed next year, a pomegranate which is definitely staying (I'm not too hopeful of any fruit but it has lovely red flowers), and two blueberry bushes which are going to Joy when she is ready to take them. That will give me space to spread the other pots out and leave easier access to be able to water the hanging baskets. 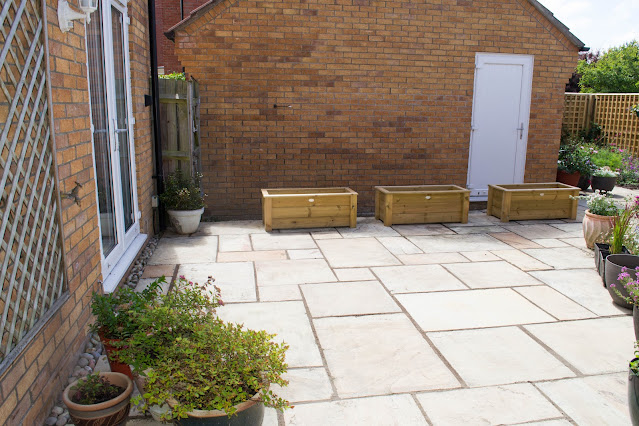 And finally, a slightly wonky photo of the wooden planters. S has measured up and we've chatted about the design for a pergola that incorporates the trellis but leaves the planters freestanding in such a way that they look like they are part of the structure. He's drawing up the design and working out the cost of the materials and then, when I can afford it, he and R (his friend who did the fencing) will build it for me. There is also scope at a later date to extend the pergola along the back wall of the house above the French doors to provide some shelter for the shelter for where the table and chairs will go ... where the pots are in the bottom left hand corner of the photo. I'm not sure about that though, although it definitely needs something as it's in full sun all afternoon. I want to see what the pergola looks like first as, to be fit for purpose, it's going to be a much more substantial structure than I was imagining.

M will be back next week to deal with all the new plants and that will be it for new plants for this year. I doubt that the wooden planters will be filled this season and anyway, I haven't really decided what plants I want in there. In saying that I may get the climber for it this year, hopefully another potato vine but this one will be white.